While the original Renault Twizy launched in 2012 may have been a bit ahead of its time, the car’s successor unveiled this week comes at a time when some cities are more crowded than ever and energy costs are soaring.

The successor is called the Duo, and it’s the latest vehicle from Mobilize, Renault’s new mobility company that was established to not only offer affordable vehicles like the Duo but also services related to car sharing and EV charging.

Like the Twizy, the Duo seats two in tandem position and is small enough that three of them can fit in a single parking space. The dimensions include a length of just over 95 inches and a width of about 51 inches.

The Duo is built around a tubular structure and features hardy plastic body panels with a surface grain that helps reduce the signs of wear and tear, Mobilize said. The vehicle has also been developed with sustainability in mind, featuring 50% recycled materials in its construction, and 95% of its components can be recycled, according to the company. 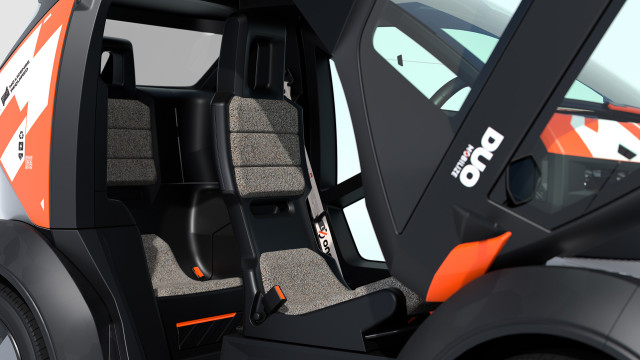 The Duo features a single electric motor at the rear that powers the rear wheels. There are two versions, one whose top speed is limited to 28 mph and thus can be driven in some countries without a license, and another whose top speed is 50 mph, making it appropriate for certain roads outside the city environment. The range is estimated at 87 miles on a charge.

Access to the cabin comes via Lamborghini-style scissor doors. The driver seat slides forward to provide access to the rear, where someone up to 5-foot-11 can fit, and there are two storage compartments on either side of the driver seat to fit two cabin bags.

The dash features a single screen and some controls all grouped into a single block with a design inspired by old boomboxes. Connecting a smartphone provides features like music and navigation, and the smartphone can also serve as the vehicle’s key, which will make car-sharing a breeze.

While there’s no plan to offer the Duo in the U.S., it will be made available on subscription or long-term leases elsewhere starting in late 2023. A cargo version, dubbed the Bento, will be added starting in 2024. It replaces the rear seat with a storage box. Mobilize is also investigating a smaller, single-seat vehicle on three wheels with a concept called the Solo.

Students “Shop with a Cop” at Springfield Walmart

Festival of Trees on display in Berkshire County

Students “Shop with a Cop” at Springfield Walmart

Festival of Trees on display in Berkshire County

Bright Nights at Forest Park to host Military and …

81th anniversary of the attack on Pearl Harbor

Postal stamps to increase by three cents to keep …

Spread of RSV declines, but flu and Covid-19 still …

Connecticut marijuana convictions to be cleared on …

Ex-soccer star who smuggled 2 women into U.S. is …

Bright Nights at Forest Park to host Military and …