MONTREAL, Nov. 24, 2022 /PRNewswire/ - The CSL Group ("CSL") is delighted to announce that former CSL President and CEO, and current Board member, Rod Jones, was presented with a Lifetime Achievement Award on Monday evening, during the International Bulk Journal ("IBJ") Awards in Rotterdam, Netherlands. 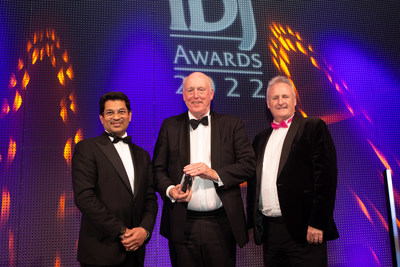 "Respected throughout the global marine transportation industry, Rod Jones stands out as an inclusive, accessible and modern leader with solid ethics and values around diversity, safety and the environment," said Ray Girvan, Publisher, International Bulk Journal.

"His open-mindedness, strong belief in people and drive to 'do the right thing' continue to inspire people at every level of the industry, both on board and at shore, regardless of age, gender, nationality and role."

Mr. Jones has devoted his entire professional life to the shipping world. His early shore-side shipping career took him through various roles at Navios Corporation and Van Ommeren Shipping. In 1985, he joined Canada Steamship Lines as Marketing Director and eventually became President of CSL International in the early 1990s, and then President and CEO of The CSL Group in 2008 until his retirement in 2017.

Mr. Jones' passion for shipping extends to The Standard Club, where he was appointed to the Board in 2000. In 2011, he was elected Chair of the Audit Committee and, later became Chair of the Club from 2014 to 2017.

During his tenure at CSL, Mr. Jones transformed the Great Lakes-focused business into the largest owner and operator of self-unloading ships in the world. Under his leadership, CSL has expanded far beyond Canada and the Americas to Australia, Asia and Europe.

"When I started in the shipping industry as a deckhand, the world was a different place. I was young and did not foresee that when I walked up that gangway for the first time, I would be enmeshed in marine shipping for the next 50 years," said Rod Jones.

"It has been a blast to work within this global industry and to have been part of CSL, a remarkable company committed to safe and environmentally sound operations, innovation and customer service. I am truly honoured to receive this award and thank IBJ, the CSL team, and most of all, my wife and family."

The CSL Group is the largest owner and operator of self-unloading ships in the world. Headquartered in Montreal with regional operations throughout the world, CSL delivers millions of tonnes of cargo annually for customers in the construction, steel, energy and agri-food sectors.