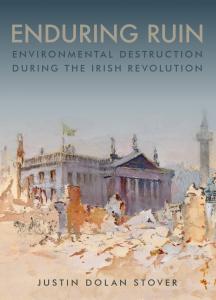 Justin Dolan Stover reveals the story of the nature, scope and embodiment of destruction in Ireland during the revolutionary period.

Destruction transcended national and ideological divisions, remaining a fixture in Irish landscapes years after independence, presenting an Ireland politically transformed yet physically disfigured”
— Justin Dolan Stover
DUBLIN, IRELAND, November 24, 2022 /EINPresswire.com/ -- In, ENDURING RUIN: Environmental Destruction during the Irish Revolution, Justin Dolan Stover reveals the story of the nature, scope and embodiment of destruction in Ireland during the revolutionary period. It shows how Irish environments – rural, urban, natural and built-up – were understood, altered and damaged throughout this formative time. Dolan Stover, explores the devastating effects of the 1916 Easter Rising, including sensory responses to war and destruction. It is about the widespread, often banal landscape manipulation from which the Irish Republican Army’s guerrilla war proceeded. It observes the social displacement that resulted from the Crown forces’ destruction of homes and businesses, and how the Irish newspaper media and international bodies sympathetic to the Irish cause aligned this destruction to existing Great War atrocity narratives. Mentioning every county in Ireland ENDURING RUIN: Environmental Destruction during the Irish Revolution, is not a fundamental environmental history per se, nor is it a definitive study of damage that occurred during the period or efforts to compensate or repair it. Rather, it examines aspects of the political revolution and military conflict through an environmental lens and attempts to centre the historical narrative on the landscapes that hosted violence. In a sense, it is as focused on the tree as the person pulling it down.

The Irish Revolution inflicted unprecedented damage to built-up and natural landscapes between 1916 and 1923. Destruction transcended national and ideological divisions and remained a fixture within Irish urban and rural landscapes years after independence, presenting an Ireland politically transformed yet physically disfigured. ENDURING RUIN: Environmental Destruction during the Irish Revolution examines how and to what degree revolutionary activity degraded, damaged and destroyed Ireland’s landscapes. This book represents the first environmental history of the revolutionary period and in doing so incorporates the roles animals, earth, water, trees, weather, and man-made infrastructure played in directing and absorbing revolutionary violence. The author traces the militarisation of private and public spaces, and how the destruction of monuments renegotiated Ireland’s civic spaces and colonial legacy. It considers Crown force reprisals, agrarian disputes, and sectarian division as amplifying Ireland’s contested spaces, where environmental damage occurred in the vacuum of public order. The decade of commemoration presents the opportunity to challenge traditional narratives and examine Ireland’s revolutionary experience afresh. As such, this book re-evaluates conventional interpretations and introduces new arguments; in doing so, it pioneers a new phase in the study of the Irish Revolution.

Notes to Editor
For additional information, to arrange an interview with the author or request an extract contact, Deirdre Roberts, deirdre@deirdreroberts.com or call 087 2633011


About the author
Justin Dolan Stover is Associate Professor and Director of Graduate Studies in Department of History at Idaho State University. He has published articles in several Irish studies journals including Éire-Ireland and Irish Historical Studies.

For inquiries or corrections to Press Releases, please reach out to EIN Presswire.
✕
× Close Ad