Kevin Scott, an African-American conductor, composer and native New Yorker, will lead the orchestra as guest conductor on January 14. Born in the Bronx and raised in Harlem, Scott has led various orchestras, choruses and bands throughout the greater New York area and in Atlanta, Philadelphia and in Bulgaria.

Mr. Scott’s works have been performed by the orchestras of Atlanta, Detroit, Houston, Minneapolis and St. Louis, and soon, Springfield.

A first for the Springfield Symphony Orchestra, there will be a spoken word presentation by Springfield’s Poet Laureate, and a local cultural icon, Magdalena Gómez as part of the concert.

A “Classical Conversation” with Kevin Scott will take place at 6:30 p.m. on January 14 for all ticketholders

Tickets start at just $15 and can be purchased on the Springfield Symphony Orchestra website, springfieldsymphony.org or by calling the box office at 413-733-2291

Themed food and drinks are a surefire way to make your party stand out, and looking at past Grammy nominees is a great way to get inspiration.

Love the Grammys? We have everything you’ll need …

With Grammy night around the corner, here are some fun ways to embrace the theme, boost your entertainment and make your guests feel a part of the festivities.

NuFace devices use low microcurrent voltage similar to natural electric currents in the body and are safe and painless on the skin.

Springfield Thunderbirds took on the Wilkes-Barre/Scranton …

Springfield Thunderbirds took on the Wilkes-Barre/Scranton …

How fast were the wind gusts Friday?

Wicked cold this weekend in Massachusetts, warm up …

How a Hampshire County sled dog team stays in business …

What Springfield is doing to protect residents as …

Infant dies after tree fell on vehicle on Route 57 …

How fast were the wind gusts Friday?

New rules would limit sugar in school meals for first …

Infant dies after tree fell on vehicle in Southwick 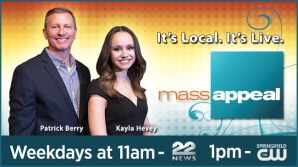