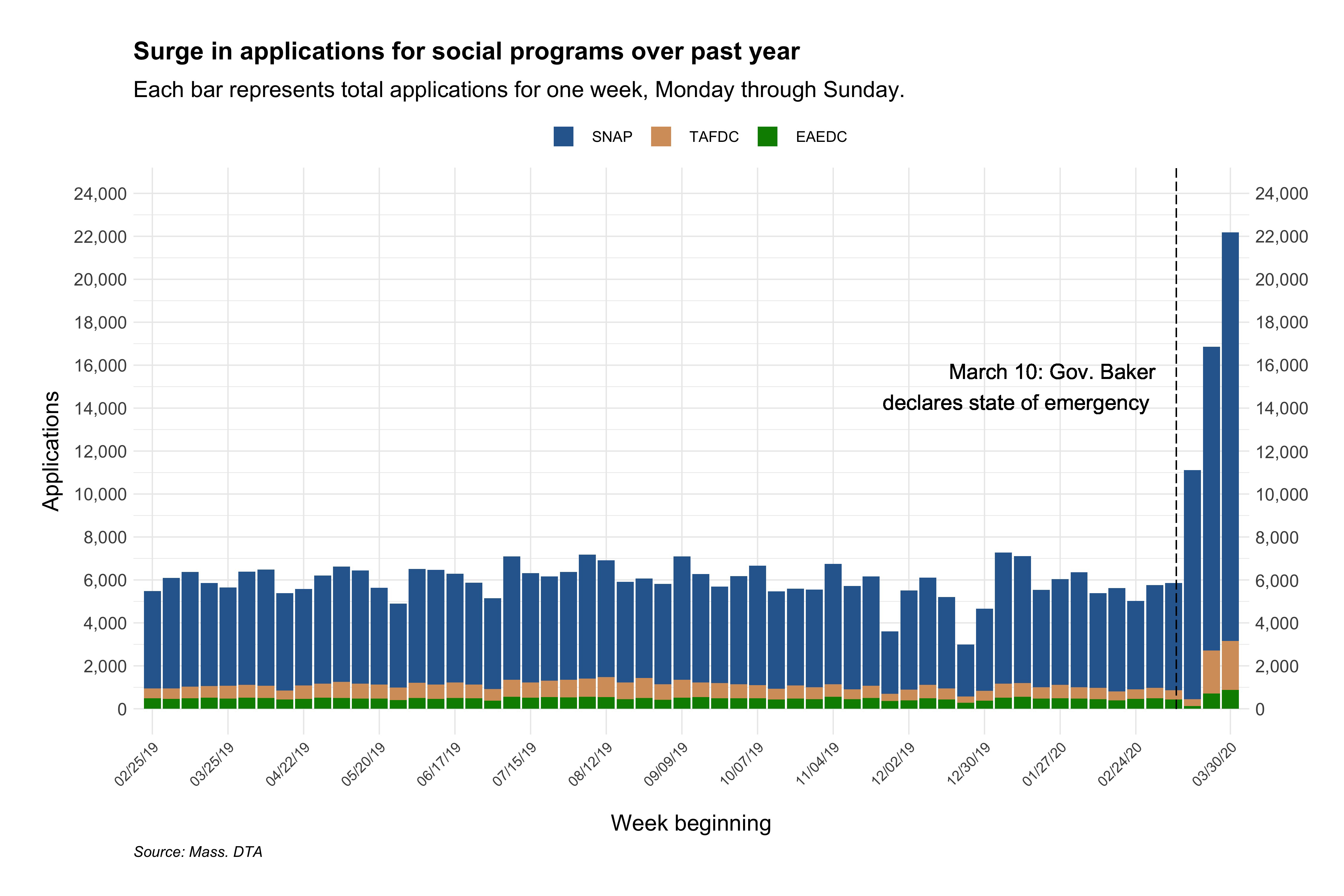 Total weekly applications for the Supplemental Nutrition Assistance Program (SNAP), the Transitional Aid to Families with Dependent Children program (TAFDC) and the Emergency Aid to the Elderly, Disabled and Children (EAEDC) more than tripled over the past month, state data show.

The heightened need will get attention next week from the Legislature: on Monday, the Children, Families and Persons with Disabilities Committee will host a virtual hearing on a bill (H 4622) that would provide an extra month of TAFDC and EAEDC benefits to families in need.

For one advocate who works in the field, the surge is unprecedented.

“We’ve never had a recession that happened like a flip of a switch, where literally the whole government, the whole private sector, social interactions, everything was shut down,” said Patricia Baker, a senior policy analyst in the Massachusetts Law Reform Institute’s Benefits Unit. “In my lifetime, 9/11 gets close, the marathon bombing gets close, certain periods of time of shortened outages come close, but nothing I have seen is like this unprecedented surge in applications.”

While the trio are not the only safety net options made available to Massachusetts residents, Patricia Baker described them as “critical and core programs” for those most in need.

In raw numbers, most of the rapid growth came in SNAP, which for most of the past year has received roughly 10 times as many applications as the other two programs. The benefit source, previously referred to as food stamps, is funded by the federal government but administered by states.

New applications for SNAP benefits during the week of March 9 totaled 4,984, within a few dozen of the median weekly total for the past year. The figures have skyrocketed since then, up to 19,033 in the week of March 30 — a 282 percent increase.

“I have never seen such a rapid increase in SNAP applications,” Patricia Baker said.

In the former, families can receive several hundred dollars per month based on their earned income and number of dependent children. There had been a cap for years on receiving additional benefits when children are born, but the Legislature repealed that limit last year.

While TAFDC applications dipped slightly in the week of March 16, they shot up in the following two weeks to more than 2,000, close to four times as many as the median weekly amount over the past year.

The EAEDC program is the smallest in scale of the three, offering benefits starting around $303 per month to people who are elderly or disabled and typically transitioning onto federal Supplemental Security Income.

Increases in applications for the elderly and disabled aid program were smaller compared to food assistance and benefits for families with children, but still were almost double last week what they were in a typical week.

“We certainly believe that in all of those programs, we’re going to see increased demand and expect and anticipate that’s something we’ll have to work through with our colleagues in the Legislature toward the end of the year,” Gov. Baker said Tuesday when asked about the flurry of new applications. “It’s also part of where, I think, some of the resources the federal government’s made available to states will ultimately get applied.”

The governor specifically cited the $2 trillion stimulus package’s funding for state and local government budgets, which will direct about $2.67 billion to Massachusetts.

“I fully expect some of that is going to end up being used to support the increases in a number of those programs as well,” he said.

Millions of people around the country are out of work due to widespread business shutdowns amid the COVID-19 outbreak. Close to 10 million Americans and almost 330,000 Massachusetts residents filed initial unemployment claims in the past two weeks, smashing all previous records.

Despite the rush on safety net programs, MassHealth has so far not seen a similar increase in demand.

Gov. Baker did not publicly express concerns about whether the system’s infrastructure can handle the heightened applications, but MLRI’s Baker said her organization has heard the Department of Transitional Assistance has experienced a fourfold increase in call volume.

While she criticized the Trump administration for past efforts to move SNAP toward a flat-funded block grant program rather than one that scales based on need, the senior policy analyst praised Massachusetts leaders for handling the pandemic’s economic tendrils under “terrific strain.”

Last week, she said, Massachusetts put more than $40 million of extra SNAP benefits authorized under a separate congressional relief package onto EBT cards to bring any Massachusetts households not receiving the full monthly benefit up to the maximum level.

The Bay State was one of only five across the country to release additional SNAP benefits in March rather than wait until April.

“Massachusetts said, ‘We need to feed people now. We’re telling people to stay home, and they need the benefits now,'” Patricia Baker said. “We’re really proud of how Massachusetts is handling this crisis.”

Citing work from her colleagues at MLRI, Baker said it will be important to track how many new applications are approved to get a sense of the costs Massachusetts faces from fulfilling the higher demand.

“I’m sure there is going to be a significant shortfall in both the EAEDC and TAFDC line items,” she said.

‘Dateline: Mystery in Big Sky Country’ investigates the death of a young veterinarian

Back to the Track: Get ready to preview NASCAR’s longest race, watch live at 3 p.m.

Police: Man passes away after minor crash in Monson

BOSTON (SHNS) - In the final daily update before the first significant wave of economic reopenings, public health officials on Sunday added just more than 1,000 new cases of the respiratory disease COVID-19 and almost 70 recent deaths to the state's pandemic totals.

The Department of Public Health reported 1,013 new cases of the coronavirus-caused illness and announced the recent deaths of 68 people from the virus. Since Feb. 1, when the first case of COVID-19 was confirmed here, 92,675 Bay Staters have become infected. Since March 20, when the first death was announced, 6,372 people have lost their lives to COVID-19 in Massachusetts.

BOSTON (WWLP) – The Department of Public Health reports Sunday there are now 92,675 confirmed positive cases of COVID-19 in Massachusetts, including 6,372 deaths.

BOSTON (SHNS) - Massachusetts started the Memorial Day weekend Saturday with routines still disrupted, the pathway toward a new normal still in its infancy, and key indicators the Baker administration is watching maintaining slow but steady progress.

Public health officials attributed 76 more deaths to the highly infectious virus, bringing the toll since the outbreak began to 6,304. Another 773 newly confirmed cases from 9,342 tests pushed the cumulative number of confirmed infections to 91,662.

Virginia woman whose rooster was stolen gets big surprise

NASA astronauts go back to the future with capsule launch

F-15 jets to flyover Massachusetts in honor of Memorial Day

State beaches reopen with restrictions to prevent spread of COVID-19